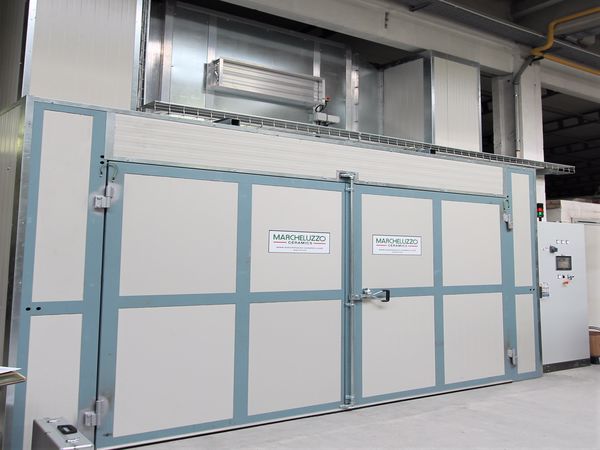 The moulds dryer is quite similar to a static dryer for sanitary wares. The air is feed through perforated sheets in order to make the most homogeneous possible the speed effect of the air over the mould.

TIME OF THE DRYING CYCLE
The drying cycle time of a mould is essentially linked to three events:

1)     Drying a mould up to 7 – 5% humidity is a lot different than  a total drying (as a matter of fact in a drying action of 3 days, it must be considered that other 3 days are necessary for the total drying). Many technological engineers prefer to  run a partial drying that avoids to wet the mould fitted on the bench ready for the first casting. More than being  an apparent advantage  this is in reality a mistake  since the residual water, from 7% to minus 3% lays on the micro-capillary circuits and it can be removed just through thermal process that produces  steam . If it is not removed during the first drying phase  it remains over the crystal as long as the mould is  utilized with a consequent important wearing of the same (for the number of castings)

2)     It is possible to shrink the cycle time by increasing the temperature degrees over the calcinations moment (Anidride formation) until there is sufficient water in the capillarity  . In fact the temperature of plaster  during this phase due to the hygrometric balancing  undertakes the same temperature  of the water particle present in the air.(Example /Dry bulb 80% humidity ratio 15%. Wet bulb 44,2°C at = m. over the sea) hence the plaster temperature is 44,2°C

3)     It is sometimes possible to create a light opening of the moulds through  suitable shims that must be then blocked  by the “mould-holding straps”. Purpose of hit opening is to allow the capillary water  to drain from  the shim inside through both sides  instead that draining from one only side which is consequently reducing the cycle time = 30-40%

SELF-PILOT
An automatic fast drying process can be made when the dryer is fed with the same moulds having the same humidity content. A thermocouple feeler is connected to the PLC for the automatic regulation of the DRY BULB temperature depending on the plaster temperature (calcinations limit).